Dill is an herb that belongs to the parsley family. It has been used for thousands of years, ever since the Middle Ages, where it was used as a defence against witchcraft. Today, it is a common ingredient in many European as well as Scandinavian cuisines.

With its somewhat sweet aroma, and mildly bitter taste which is often compared to that of caraway, dill or dill weed, as it is widely known, has plenty of modern culinary uses. But most commonly, it used for pickling. In the U.S, dill pickles have become extremely popular, whereas in countries such as Russia and Scandinavian regions, dill is used heavily in courts-bouillons, as well as for making sauces used in preparing fish dishes, soups, casseroles and pickled salmon. Dill is also used for making rye breads and cakes.

When chopped, the fresh leaves of this aromatic herb are used as flavouring agents for seafood such as trout, shrimp and salmon, as well as devilled eggs, cream and cottage cheese, beets, cauliflower, soups and green beans.
When the herb is harvested after its flowers have blossomed, it is known as crown dill. This has a more intense aroma compared to baby dill, and its seeds and flower heads are commonly used in the preparation of different pickles. 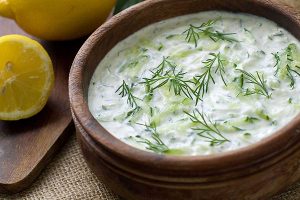