Annatto is both a spice or condiment as well as a food colouring, which is reddish-orange in colour. It is extracted from the achiote tree, found in Central and South America, usually Mexico and Brazil. The seeds and the pulp of the plant have been used as a key ingredient in many dishes, as a medicine as well as a dye for hundreds of years in these regions. 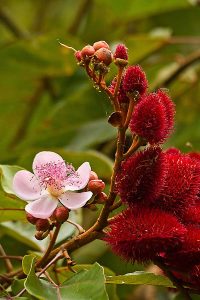 Annatto has a unique flavour which is musky and a little peppery. Due to its strong flavour and even stronger hue, it is used both as food-colouring as well as for imparting aroma and flavour to a wide range of Latin American dishes. Usually, it is used after the seeds have been ground into either a paste or powder, rather than using the seeds whole.

Annatto is used for the yellow colour of cheese, margarine, butter and other foods, all of which would only have a pale cream colour if not for the condiment. Moreover, annatto is also taken y many people to treat various types of illnesses ranging from diabetes, malaria, hepatitis to heartburn, diarrhoea, fever and to improve fluid retention. Since it has antioxidant properties, it is also used as a bug repellent and in the treatment of burns.