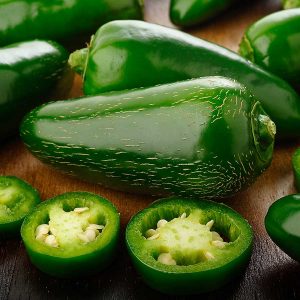 Jalapeño is a type of chili pepper that is traditionally cultivated in Mexico. Prior to the Spanish conquest, jalapeños were used by the Aztecs in the form ofchipotles and mole which was made form chipotles, apart from selling them as fresh chillies in their markets. Today, jalapeños are mainly produced in Mexico, United States, where it is mostly grown in California, New Mexico and Texas, Spain, Peru, China as well as India.

When picked, jalapeños are usually green in colour as they are still unripe. However, as they ripen, they start changing colours, slowly turning red. Red, ripe jalapeños are not hotter than the green ones. Only their flavour gets less grassy and more fruity. Jalapeños register between a range of 2,500 to 8,000 units on the Scoville Scale.

Since they do not have an intense, hot flavour, jalapeños cab be eaten whole. Many people like to stuff them with cheese, or deep-fry them or have them with bread – these are common appetizers across the globe. They are also often preserved and made into pickles, and are served as a condiment alongside various main dishes. Like many peppers, they are also a key ingredient in making sauces, salsas as well as the popular bottled hot sauces.