You are what you eat, and sometimes what you eat can get you in the mood. The bedroom mood. If you fancy a bit of fuel between the sheets, get things going this Valentine’s Day with the help of these aphrodisiac foods. Plenty of these foods have been prized for centuries, eaten and revered since ancient times for their powerful sexual potential. Best of all, they all taste pretty good.

If you’re planning a little fun this Valentine’s Day – or any day of the year – try some of these aphrodisiac foods to take things to the next level! Cook a romantic meal, a delicious dessert, or just add a little booze to throw together the ultimate sexy aphrodisiac cocktail.

8 Aphrodisiac Foods to Get You in the Mood

What is an aphrodisiac?

There are typically four things that can make a food an aphrodisiac. The first criteria is food that is suggestive in shape. Think the classic phallic shaped bananas, asparagus, or carrots. Sometimes, just seeing something that’s shaped like a sexual organ will bring the thought of sex to mind. And you know what happens next!

The second criteria is foods that get blood pumping to your organs or nether regions. These kind of aphrodisiacs can bring on pleasurable sensations that get your body in the mood for some fun. The third criteria are plants that have hormones which stimulate our own hormones and libidos, creating sexual desire in that way. Finally, super healthy plants that promote health, strength, and vigour are also deemed aphrodisiacs. Good nutrition brings good health and high energy, setting the perfect stage for an active and satisfying sex life.

How do aphrodisiacs work?

Aphrodisiac foods can work in two ways: some effect the mind to create sexual desire, while others stimulate the body into feeling real good. The aphrodisiac foods in this list will either get blood pumping down there, produce chemicals or hormones that get us in the mood, orrelax the mind and lower inhibitions.

All in all, aphrodisiac foods will either bring on sexual arousal, increase your pleasure during sexy times, or help you perform for longer. They do that by stimulating blood flow, regulating hormones, enhancing libido, increasing lubrication, and more. 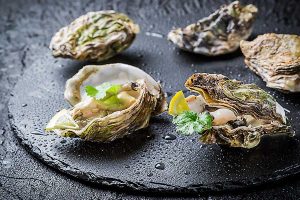 If it’s good enough for Casanova, it’s good enough for us! Legend has it that the Italian romancer used to eat dozens of oysters a day. They were even a favourite of Cleopatra (and she had her fair share of lovers, too!). According to legend, Casanova once even seduced a virgin by slipping an oyster from his mouth to hers. It sounds like a seriously sloppy seawater kiss, but hey, it worked for him. Still, we don’t suggest surprising your lover with an oyster kiss on Valentine’s Day. Scientifically, oysters boost dopamine levels which govern libido. They’re also high in zinc, an essential mineral for healthy sperm and testosterone levels. 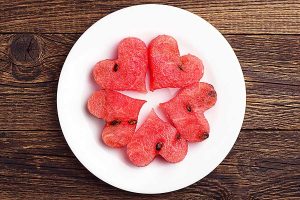 This sweet, hydrating fruit is being called the new viagra, and we’re into it! According to director of the Fruit and Vegetable Improvement Centre, Bhimu Patil, watermelon has a similar effect on blood vessels as the revered viagra. Essentially, watermelon increases the amount of nitric acid in the body. This is a chemical that’s responsible for enhancing blood flow, relaxing your blood vessels, and bringing on sexual arousal. Basically, watermelon pumps your blood downwards, right where you want it to be! 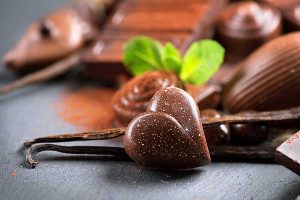 There’s no better gift you can give yourself (or your lover) than chocolate, and there’s a reason why it’s a favourite on Valentine’s Day! Cocoa was considered to be one of the most sacred foods during Aztec times, thought to be a source of nourishment direct from the Gods. Cocoa is packed with more antioxidants than both green tea and red wine, and contains the chemical phenylethylamine which helps stimulate excitement and wellbeing in the body.

And according to the Journal of Sexual Medicine, women who eat chocolate every day enjoyed a more active sex life than those who didn’t. So next time you think twice about reaching for that chocolate, give yourself permission – just make sure it’s at least 75% cocoa! 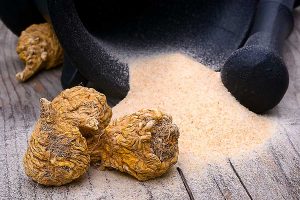 This sweet root vegetable is one of the few natural aphrodisiacs that is backed by solid scientific research. Known as Peruvian viagra, maca is a libido-boosting vegetable that also helps to increase fertility in women. It has also been shown to help counter the low libido side effects of certain types of antidepressants. Scientific studies have found that feeding maca to rats and mice helped to increase their libido and improve erectile function. A similar study done on humans gave similar results, helping to enhance their sexual desire and libido. 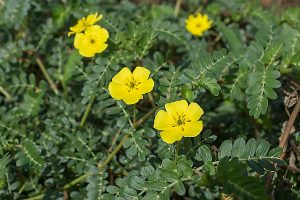 These sneaky summer pests are a precious therapeutic herb used since ancient times! Think twice before you swear at a bindi next time, for these weeds are a herb that’s revered in both ancient Ayurvedic and traditional Chinese medicines. Also known as tribulus terrestris, bindis have a tremendous impact on women’s sexual health and libido.

In a study, 88% of women who were given an extract of the plant experienced significantly higher levels of desire, arousal, lubrication, and orgasm satisfaction. They’re a one-stop shop for enhancing any and all sexual dysfunction. Studies have also found that bindis can increase sperm production in rats, so they’re not just a women’s aphrodisiac. 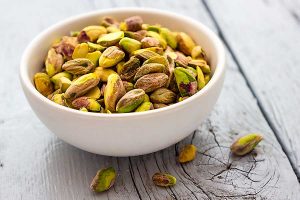 Pistachios are another ancient favourite that people have been snacking on since 6,000 BC. These nuts are delicious, healthy, stimulating, and have been shown to help ease the symptoms of erectile dysfunction. If you’re having a bit of trouble getting your blood to that area, try consuming 100 grams of pistachios everyday for three weeks. It’s been done in a study before, and men experienced increased blood flow and firmer erections. Who could say no to that?

Saffron is another one of Cleopatra’s favourites that has long been recognised for its effects on sex drive. While Cleopatra chose to bathe in saffron-infused milk to get her dose of this aphrodisiac, you don’t have to resort to such methods. Just a sprig or two will do just fine!

Saffron has been shown to help women experience higher levels of arousal and lubrication. Studies have found that saffron also helps to increase sperm motility in men, and can even counter the low libido effects of certain antidepressants. One of the most expensive spices by weight, add a sprig or two to your Valentine’s Day romantic dinners and you’ll be going all night! 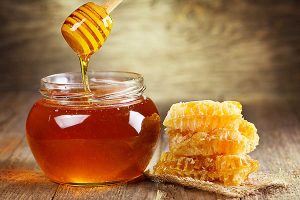 Hippocrates, the father of modern medicine, used to prescribe honey in Ancient Greece to help . Honey is in itself a symbol of procreation, made during the process of pollination (read: birds & the bees, honeymoons – there’s clearly something about honey). Honey also contains boron, which helps increase blood flow during sexual arousal. Eat some honey and your blood will be pumped straight to your nether regions, making them nice and full when you want them to be.

Feeling a little romantic? Why not impress your hot date with a Romantic Dinner experience, complete with flowers, champagne, and a multi-course meal packed with aphrodisiac foods.