Confit is a method of preserving food for long periods by a process of slow cooking. The term comes from the French word confire, which means ‘to preserve’, and originated as a means to keep meat edible without refrigeration. In cooking terminology, confit is usually used to describe food that has been slow cooked in grease, oil, or syrup at a low temperature, however traditional confit involves cooking the meat in its own rendered fat.  Foods that are prepared in confit style will typically be cooked at temperatures of around 90 degrees celsius or cooler and last up to 3 months. In modern culinary terms, the confit technique is rarely used to preserve food. It is usually used to refer to foods cooked slowly at a low temperature, and in oil or fat.

How do you confit meat?

When preparing meat for preservation using the confit method, you first salt the meat to help extract any moisture. The meat is then submerged in fat and simmered at an extremely low temperature until it achieves a tender, buttery texture. Once cooled, the confit meat is stored in crocks and covered with the remaining fat to prevent exposure to bacteria and the elements. The crock is then stored in a cool room – or these days, in a refrigerator.

When making a confit of duck or goose, the legs are usually used. These are salted and then seasoned heavily with herbs, before being submerged in their own rendered fat and left to slow cook. Temperatures usually remain below 85 degrees celsius, and it can take days to reach the final product. Turkey and pork can also be prepared using the same method. 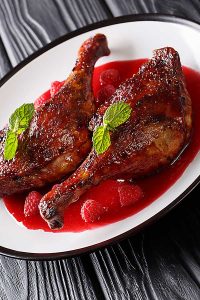 Confit is one of the oldest methods of food preservation. The most common meats used for confit are goose, duck, and pork, with duck gizzards prevailing as the most used. The confit method originated in Occitan France, commonly referred to as ‘confit country’. Here, goose fat is most commonly used when cooking and preserving foods. In Provence, olive oil is used as it is cheaper and more plentiful. Each region of confit country is known for their favouring of particular meats in their confit preparations. Béarn is known for its goose confit, while Saintoge and Brantôme are known for duck confit served with truffles and potatoes. Toulouse and Dordogne specialise in meat confit, used in dishes like cassoulet. The Basque region is also known for its cassouliet, as well as garbure which is a dish that features confit and beans.

Confit meat is stored in a crock where it is simultaneously preserved and aged. During the ageing period, the meat develops a whole new flavour that is completely different to its original taste. In storage, the muscles and connective tissue of the meat slowly break down over time, giving it an extremely tender texture. The meat will easily fall off the bone and maintain its moisture and juiciness without becoming overly greasy. When ready to consume, the meat will be fried in a skillet, grilled, or baked until it develops a crispy skin. Duck confit is often served with potatoes fried in the same duck fat as the confit. Sides include lentils or bitter green salads, which help to balance the richness of the meat.

What is fruit confit?

The confit method can also be used to preserve fruits. Instead of grease, fat, or oil, sugar is used to candy and extend the shelf life of fruits. Depending on the size of the fruit, it can be cooked either whole or cut into small pieces before being infused in sugar. Smaller fruits, like cherries and blueberries tend to be confit whole, while larger fruits will be sliced into smaller pieces before cooking.